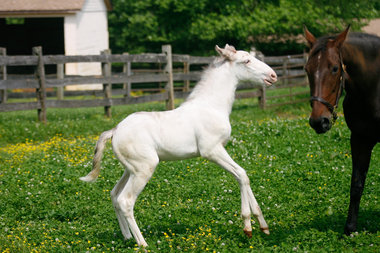 ‘This is what we do with the horses,’ she said as she sponged her mother’s hot face, dripping water everywhere. Her mother smiled a shaky little smile. The sky was blue from horizon to horizon on the flat grasslands. Not a cloud in sight. Their car was parked as far off the road as she dared. She didn’t want to worry about trying to get back on the road and getting stuck in the soft dusty dirt.

“Did I ever tell you about the ghost colt?” her mother said softly, her eyes still shut, her body slumped down in the passenger seat.

“No, Ma,” she said. “But it’s okay. Just rest now and we’ll get back to the house soon. You just got overheated, that’s all. You’ll feel better soon.”

“We named him Casper. Not real original, but there you go. He was white like a dream, so beautiful. Not real skittish, just easy going from start to, well, end.” Her mother paused, and opened her eyes. “Cassie, you would have loved him.”

I’ve never met a horse I didn’t love,” she said and poured more water onto the ragged towel. She wiped at her mother’s face again until her mother pushed the towel away with the back of one hand.

“I’m trying to tell you a story now, so settle down please.”

Cassie tried to keep from smiling as she moved back and relaxed into her seat. Her mother was feeling better, she could tell.

“A couple of the help didn’t want anything to do with him, just superstitious, I guess but everyone else loved him. He had a sweet nature through and through.  He had this funny thing where he was terrified of snakes, and you know we get quite a few out there. He’d make this strange high squealing sound when he saw one. I’ve never heard anything like it. He’d squeal and then race down to the other end of the field. It happened a couple of times a week at least, so we all got used to it.  Then one day, we heard him squealing and squealing and squealing and it kept going on and on. Finally somebody went to go see why.”

Why was he squealing, Ma?” Cassie asked.

“Your older brother Peter was just a baby then and we had him in a playpen out under the big oak tree next to the field where the horses are. He loved to play out there for hours and I could hang laundry and do chores and not have to worry about him, just checking up on him from time to time. Casper was standing by the fence line under that oak tree just squealing away…and when we went to look there was a rattler in Peter’s playpen, just a foot or two away. Peter was happy playing with some blocks not knowing. You remember Sam?”

“Yes, I remember Sam. He was gruff but had a good heart.”

“Sam saw what was happening and before the rest of us could think of what to do, he acted quick as a flash. He pulled his knife out of the holster and swooped up Peter with one hand and stabbed that rattler in the skull with the other. I screamed, that’s about all I was good for. I couldn’t believe he was that fast. I couldn’t believe it.  And then Casper finally stopped squealing. We all turned to look at him and he just looked back at us, then he slowly trotted off.  With a little swagger I might add.  It was something to see, alright.”

“So what happened to Casper?” Cassie asked. “I don’t remember him.”

“Ah, well, he died when he was four, never made it to full grown. Something with his kidneys, if I remember right. But he played his role. We all have our role to play in life, we do, and Casper sure played his. Magnificently. It just goes to show that a quirky characteristic that we have might end up being our greatest strength. I truly believe that.”

Her mother’s face was much less red now and her breathing was back to normal. Cassie felt it was safe to get back to driving and get her mother home to some air conditioning. The sky was blue, the road shimmered ahead and it was time to head home.