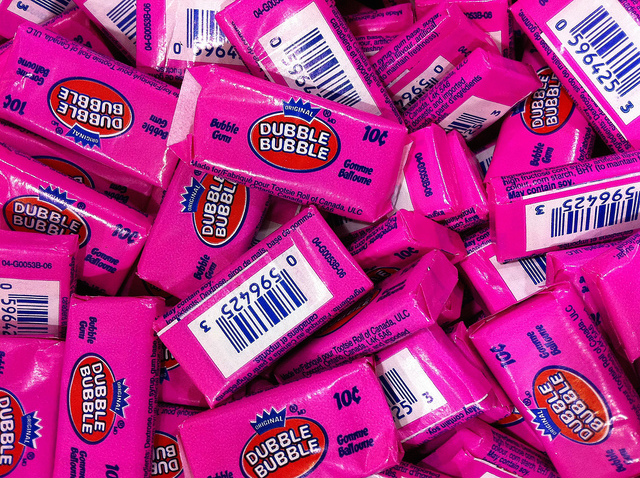 The three judges from the Guinness Book of World Records peered closely into her mouth and then nodded. She was handed three pink pieces of Dubble Bubble Bubblegum and she put them into her mouth. She chewed furiously as she stepped up to the edge of the stage, the large crowd cheering. Her husband was in the front row, wearing a bubblegum pink polo shirt and a matching hat, and holding up a handmade sign that said “BLOW IT BIG BABY!”

The gum was almost ready, it was almost to the right consistency, she was almost ready to do this. Her jaws moved up and down in a ratcheting motion.  She now realized that every turn, choice and action that she had ever made was for a reason and had lead her to this very moment in time.  She had trained for many months, with deep breathing exercises and jaw workouts. She had studied the YouTube videos of the masters. She had practiced over and over and over again.

She took a deep breath, and then another. This is it, she thought. It’s showtime. She began to blow a bubble. The crowd went crazy, stamping their feet and screaming. The bubble got bigger and bigger and then popped. Damn. Two tries left. She began another bubble and this one looked more promising. The judges leaned towards her with their complicated measuring devices. It needed to be more than 20 inches in diameter. The bubble popped and it wasn’t nearly large enough. One last try.  I’ve got this, she thought.

She tuned out all the yelling and noise and hummed to herself. Another breath. She began to blow a bubble and it kept growing and growing…..the judges moved closer, grinning, it grew and grew, this was it, this was it, it grew oh so huge, this is it! One judge threw up her hands in a victory pose and the other two nodded yes. She had just broken the world record for the largest bubblegum bubble!!

The bubble burst and she grabbed at it with both hands, stuffing it mostly back into her mouth. It tasted so good still, it tasted like victory. Her husband scrambled up onto the stage, dropping the sign.

“You did it baby! You did it you did it!” he yelled, grabbing her and kissing her and getting an unfortunate amount of gum onto his beard. This was the picture that made all the papers, the two of them pulling away after kissing, with strands of pink gum like a thick spiderweb between their faces.

She began to cry once they reached backstage.

“Oh, honey, I know, I feel like crying too,” her husband said, his arm around her shoulders. “It’s so amazing and wonderful what you did.”

“That’s not it,” she sobbed. “Yes, it’s wonderful. But now I have nothing. Nothing to work towards. Nothing to look forward to. It’s all over.”

Her husband was silent for a moment.  And then he whispered in her ear. “Don’t you worry, darling. There’s a blueberry pie eating contest in Buck City in a month and a half.”

She perked up right away. Yes, yes there was. She could train for the pie eating contest. Why, it was possible she might make it to the nationals, if she worked hard enough at it. There’s always hope, she thought. Especially with my sweet husband by my side.