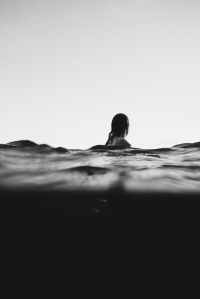 She felt for the lock in the dark locker room.  She knew the combination by feel, the tumblers clicking in their familiar pattern. She dare not turn on the light in case the security guard saw. At this time of night he was usually snoring on the boldly patterned couch in the teacher’s lounge, but she didn’t want to chance it. The lock clicked open and she opened the locker door. She had oiled the hinges months ago so it made no noise.

She silently slipped off her clothing and reached for the silky one-piece swimsuit. It was so lightweight it felt like wearing gossamer wings. Cut high on the thighs and straps criss-crossing her back.  It was built for speed, it was built to fly, and flying was what she intended to do. She put her clothing into the locker and shut the door, crossing the room to enter the room where her kingdom waited for her.

She’d swam in many pools, but this one was special. There were large skylights across the enormous ceiling, which showcased the weather, day and night. The pool floors and walls were painted metallic gold, so it was like swimming in a giant gold tea-cup. Pinpoint lights had been installed in the upper walls that curved into the ceiling so the water glimmered with tiny sparks here and there. The pool was a bequest by a wealthy parent, and while there were mutters about the gaudiness of it all, at night, with the main lights off, it was magical.

She sat on the edge of the pool and then quietly slipped into the water. Her arms began the familiar breast stroke, her legs frog kicking behind her. It was her favorite stroke, because it was relatively quiet, and more importantly, she could look about the room and up into the sky as she swam. The sky was clear tonight and the half full moon cast a pearl shine on her forearms as she swam. No sounds except the water as she pushed it in firm strokes, moving down the length of the pool. She closed her eyes for a moment, just feeling the water caress her skin. She reached the end of the pool and turned to swim back, and then paused.  There was a figure standing at the other end. It was too dark to see who it was. She pretended not to notice and began to swim back.

As she drew close she could see it was her husband Jonathan. She reached the edge and looked up at him.

“So this is where you slip off to……..so late at night,” he said evenly. “You’re so lovely when you swim, Katherine. You always have been.”

“Lovely was not the intention,” she said.

“But lovely all the same.”

“Don’t you want to know my intention?”

“Oh, I think I can guess,” he said. “It’s your rabbit hole, your hidey-place. Where you leave all your cares behind.”

She reached out of the water and placed her hand on his foot.

“I can share. I can share my refuge with you. I didn’t think you needed one. You are always so stalwart. So strong-shouldered.”

He was smiling. “Would you share with me, Kat?”

“Aren’t you worried about getting caught?”

“What’s the worst that can happen?  We get caught, there’s a tiny scandal, and we find another refuge. Come join me, my love.”

He took off his clothes slowly, shyly. “What a spell you cast on me, Katherine,” he said and joined her in the pool. They kissed extravagantly, and then sweetly, and then together, they began to swim down the length of the pool.