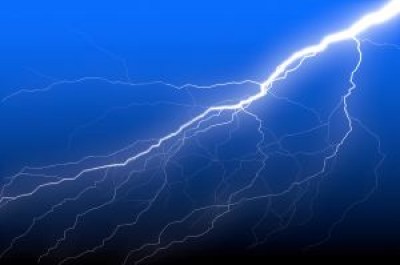 “It is an electric storm of some violence.  They can see the forked lightning flash around them and above them.  The snowy peaks and dark creased mineral clefts and ridges of the sharp alps are ranged inhospitably below them.  The plane shakes and shudders like a thin tin can, and other bottles of wine tip over on to other trays and on to other breasts of chickens.  Julia and Cynthia exchange worldly glances of comically exaggerated alarm.  Anais shuts her eyes and Mrs. Jerrold placidly butters her bread roll.  Sally Hepburn stares, transfixed, out of the window, at the galvanic display of heavenly fireworks, and at the white mountain summits, as though expecting to see the long-legged monster of Frankenstein loping over the crevasses beneath.  Candida Wilton quietly resigns herself to death.  If it be now, so be it, but she really would have liked to have seen Carthage and Cumae and Naples first.  It seems a pity to get so far, and not to arrive.

Death does not yet choose to claim her or any of her fellow passengers.  Death gives them a warning, but lets them pass through.  The tumult abates, and the frail little metal craft sails on to calmer skies.  The pilot broadcasts over the loudspeaker system a polite and perhaps faintly sardonic wish that they have not been too discomforted by the slight turbulence.  The Seat Belt signs remain illumined, but the cabin staff begins to move around again, reassuringly, collecting trays, distributing coffee, offering Duty Free.  The atmosphere still crackles with electricity.  Candida can feel the crackling in her brain.  Like some forms of electric shock therapy, it seems to have done her good.  It has burnt out some dust.  She feels dazzlingly, radiantly lucid, as Salammbo flies her south to Carthage.  She ignores the unceasing conversation of Sally, which starts up again as soon as the thunderclaps fall silent.  She feels that the rest of her life lies before her on a clear and shining track.  Onwards and upwards, nach Cuma, nach Cuma.  She has left her earthly attachments far behind, and is sailing into the future.  It lies before her like a cloth of dreams.  All shall be made plain at last, in this bright new light.”