An interesting test of Katz’s forbearance 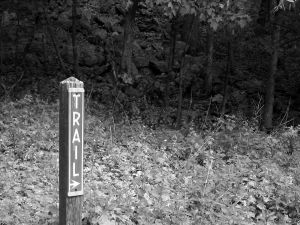 “On the fourth evening , we made a friend.  We were sitting in a nice little clearing beside the trail, our tents pitched, eating our noodles, savoring the exquisite pleasure of just sitting, when a plumpish, bespectacled young woman in a red jacket and the customary outsized pack came along.  She regarded us with the crinkled squint of someone who is either chronically confused or can’t see very well.  We exchanged hellos and the usual banalities about the weather and where we were.  Then she squinted at the gathering gloom and announced she would camp with us.

Her name was Mary Ellen.  She was from Florida, and she was, as Katz forever termed her in a special tone of awe, a piece of work.  She talked nonstop, except when she was clearing out her eustachian tubes (which she did frequently) by pinching her nose and blowing out with a series of violent and alarming snorts of a sort that would make a dog leave the sofa and get under a table in the next room.  I have long known that it is part of God’s plan for me to spend a little time with each of the most stupid people on earth, and Mary Ellen was proof that even in the Appalachian woods I would not be spared.  It became evident from the first moment that she was a rarity.

“So what are you guys eating?” she said, plonking herself down on a spare log, and lifting her head to peer into our bowls.  “Noodles?  Big mistake.  Noodles have got like no energy.  I mean like zero.”  She unblocked her ears.  “Is that a Starship tent?”

“Big mistake,  They must have seen you coming at the camping store.  What did you pay for it?”

“Too much, that’s how much.  You should have got a three-season tent.”

“It is a three-season tent.”

“Pardon me for saying so, but it is like seriously dumb to come here in March without a three-season tent.”  She unblocked her ears.

“It is a three-season tent.”

“You’re lucky you haven’t froze yet.  You should go back and like punch out the guy that sold it to you because he’s been like, you know, negligible selling you that.”

“Believe me, it is a three season tent.”

She unblocked her ears and shook her head impatiently.  “That’s a three-season tent.”  She indicated Katz’s tent.

She glanced at it again.  “Whatever.  How many miles did you do today?”

“About ten.”  Actually we had done eight point four, but this had included several formidable escarpments, including a notable wall of hell called Preaching Rock, the highest eminence since Springer Mountain, for which we had awarded ourselves bonus miles, for purposes of morale.

“Ten miles?  Is that all?  You guys must be like, really out of shape.  I did fourteen-two.”

“How many have your lips done?” said Katz, looking up from his noodles.

She fixed him with one of her more severe squints.  “Same as the rest of me, of course.”  She gave me a private look as if to say, “Is your friend seriously weird or something?”  She cleared her ears.  “I started at Gooch Gap.”

“So did we.  That’s only eight point four miles.”

She shook her head sharply, as if shooing a particularly tenacious fly.  “Fourteen-two.”

“Excuse me, but I just walked it.  I think I ought to know.”  And then suddenly:  “God, are those Timberland boots?  MEGA mistake.  How much did you pay for them?”

And so it went.  Eventually I went off to swill out the bowls and hang the food bag.  When I came back, she was fixing her own dinner but still talking away at Katz.

“You know what your problem is?” she was saying.  “Pardon my French, but you’re too fat.”

Katz looked at her in silent wonder.  “Excuse me?”

“You’re too fat.  You should have lost weight before you came out here.  Shoulda done some training, ’cause you could have like a serious, you know, heart thing out here.”

“You know, when your heart stops and you like, you know, die.”

“Do you mean a heart attack?”

Mary Ellen, it should be noted, was not short on flesh herself, and unwisely at that moment she leaned over to get something from her pack, displaying an expanse of backside on which you could have projected motion pictures for, let us say, an army base.  It was an interesting test of Katz’s forbearance.  He said nothing but rose to go for a pee, and out of the side of his mouth  as he passed me he rendered a certain convenient expletive as three low, dismayed syllables, like the call of a freight train in the night.”

—Bill Bryson, A Walk In The Woods

2 Responses to An interesting test of Katz’s forbearance