Goats on a Roof 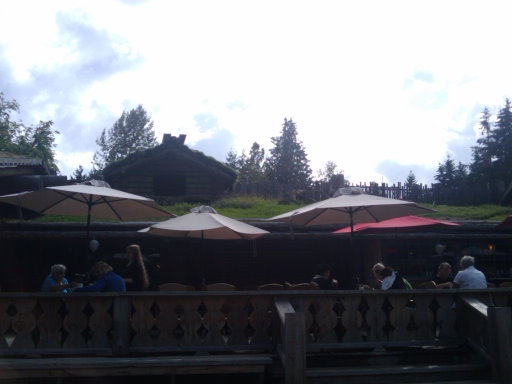 I don’t know how to feel about it. Bemused? Sad? Awestruck? Let me tell you a story.

Several times during my childhood my family would travel up to Canada for a summer vacation trip. We’d take the ferry over and spend a couple of days in Victoria before going up island to visit my aunt and grandparents who lived in the uncivilised (to us suburban kids) wilds above Nanaimo. There were several landmarks we were always excited to see, such as the bottomless lake, the Cathedral of Trees, and most especially, the Goats on the Roof.

The Goats on the Roof. A small mom & pop country market that was noted for having its long roof covered with grass with several goats living up on it. That’s it. As a kid, it was WONDERFUL. Vaguely reminiscent of Heidi and the swiss alps. Very exotic for a kid growing up in a tract house in California.

My husband and I celebrated our 10th anniversary this week and he took me to Victoria for my present. Lucky me! We have been to Victoria several times before but never ventured beyond its borders and I had a hankering to go up island again to see the old landmarks.

It’s been 17 or 18 years so I wasn’t even sure they’d all still be there, especially an old country market in the tiny country town of Coombs (population less than 2000) so imagine my astonishment when we saw a traffic jam around the market and almost nowhere to park. The market was literally swarming with tourists. The market itself had increased 3 times in size and now featured a cafe outside where you could sit and watch……you guessed it……the goats on the roof. My husband deemed it a tourist trap and chose to wait in the car while I ventured inside to discover a sophisticated international market any major city would find worthy of praise. Featuring large cheese and bakery counters as well as shelf after shelf of unusual pantry items from all over the world, such as biscuits from England, spices from Africa and more East Indian curries than I have seen anywhere else, and prominently displaying local products, like honey and jam.

It reminded me of the fabulous Bon Marche food market in Paris, albeit a much humbler setting with log walls and posts.

Is it a tourist trap? Depends on your definition. To me, a tourist trap sucks in tourists and has no redeeming value. If I wasn’t so in shock over the transformation I might have bought a great deal of goodies. I like bringing home interesting local foods from trips.

Was my childhood memory destroyed? No, not exactly. What was once a humble market is now a bustling commercial enterprise. They even have their own website. Www.oldcountrymarket.com. It’s actually pretty awe-inspiring. Good for them, I think, and now I know future generations of kids won’t forget their glimpse of the Goats on the ROOF.

2 Responses to Goats on a Roof