The Consequences of a single headstrong moment 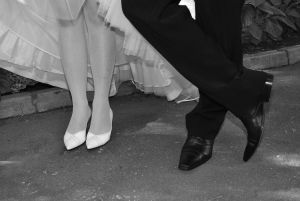 “Perhaps marriage is the greatest test we are put to.  That’s what I tell my young couples.  It’s a case of facing up to your responsibility for the consequences of a single headstrong moment, when you may be drunk with the smell of orange blossom.  How many of us think of the appalling consequences that may flow from a brief conversation at the altar?”

Among the many wedding formalities which Leslie had insisted on was the preliminary chat with the rector.  They were gathered together in Simeon’s study and Leslie listened intently as Charlotte stared thoughtfully out of the window to where Dorothy was bent like an elegant and elderly croquet hoop in the border, making an early planting of winter pansies.

“That’s what I say to all the young Jacks and Jills, the Harrys and the Doreens, the Leslies and the Charlottes,” Simeon assured them, although he seemed to be speaking mainly for the benefit of himself.  “The consequences may be quite unforeseen.  You throw a pebble into a still pond and who knows where the ripples will end?  They will end up far away, generations later, when you and your little stone will be quite forgotten.  I know what you are going to ask, you’re going to ask, where does God come in all this?  Is God the ripples?  Is God the pebble?  Is God, as our Eastern friends would have us believe, simply the surface of the pond?  Or are you God?  Leslie and Charlotte.  Are you creating a future which you have chosen not to control?  Difficult, isn’t it?  Terribly difficult.  We can only hope to do justice.  Hope to….”  Simeon’s voice died away, apparently discouraged.  He looked at Charlotte and had to admit that no one could have called her beautiful; he turned back to Leslie Titmuss, and the task in hand.  “Of course, it’s easy for you now Leslie, easy when Charlotte is in the bloom of youth.  But when she’s older, when she’s tired of life, when she starts to be afraid of death, when her looks are vanishing it’ll be difficult for you then, terribly difficult.  That’ll be the test.”

There was a prolonged and not particularly cheerful silence.  Then Simeon knocked out his pipe with relief.

“Well now, at this stage, I usually offer my young couple a bottle of Simcox’s light ale, or would you rather we strolled across to the pub for a pint?”

This entry was posted in Love and Marriage Quotes and tagged funny quote, love and marriage. Bookmark the permalink.